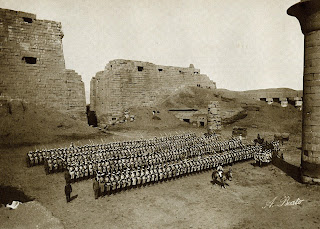 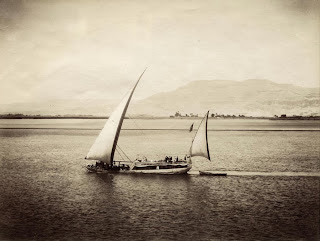 Biography from Wikipedia, the free encyclopedia:

Antonio Beato (after 1832 - 1906), also known as Antoine Beato, was a British and Italian photographer. He is noted for his genre works, portraits, views of the architecture and landscapes of Egypt and the other locations in the Mediterranean region. He was the younger brother of photographer Felice Beato (1832 - 1909), with whom he sometimes worked.

Little is known of Antonio Beato's origins but he was probably born in Venetian territory after 1832, and later became a naturalized British citizen. His brother, at least, was born in Venice, but the family may have moved to Corfu, which had been a Venetian possession until 1814 when it was acquired by Britain.

Because of the existence of a number of photographs signed "Felice Antonio Beato" and "Felice A. Beato", it was long assumed that there was one photographer who somehow managed to photograph at the same time in places as distant as Egypt and Japan. But in 1983 it was shown by Italo Zannier (Bennett 1996, 38) that "Felice Antonio Beato" represented two brothers, Felice Beato and Antonio Beato, who sometimes worked together, sharing a signature. The confusion arising from the signatures continues to cause problems in identifying which of the two photographers was the creator of a given image.

Antonio often used the French version of his given name, going by Antoine Beato. It is presumed that he did so because he mainly worked in Egypt, which had a large French-speaking population.

In 1853 or 1854 Antonio's brother and James Robertson formed a photographic partnership called "Robertson & Beato". Antonio joined them on photographic expeditions to Malta in 1854 or 1856 and to Greece and Jerusalem in 1857. A number of the firm's photographs produced in the 1850s are signed "Robertson, Beato and Co." and it is believed that the "and Co." refers to Antonio.

In July 1858 Antonio joined Felice in Calcutta. Felice had been in India since the beginning of the year photographing the aftermath of the Indian Rebellion of 1857. Antonio also photographed in India until December 1859 when he left Calcutta, probably for health reasons, and headed for Malta by way of Suez.

Antonio Beato went to Cairo in 1860 where he spent two years before moving to Luxor where he opened a photographic studio in 1862 and began producing tourist images of the people and architectural sites of the area. In the late 1860s, Beato was in partnership with Hippolyte Arnoux.

Interestingly, in 1864, at a time when his brother Felice was living and photographing in Japan, Antonio photographed members of Ikeda Nagaoki's Japanese mission who were visiting Egypt on their way to France.

Antonio Beato died in Luxor in 1906. His widow published a notice of his death while offering a house and equipment for sale.

Posted by John A Benigno at Wednesday, October 30, 2013 No comments: