“I didn’t choose photography; it chose me. I didn’t know it at the time. An artist doesn’t think first then do it, he is driven.”

“I felt that the camera grew an extension of my eyes and moved with me.”

“When I was a little girl, children were looked upon as, “not yet”—something not yet perfect. I resented this approach toward me. But I was no fighter, and I retreated into my own world. This world was so colorful and so rich that I wanted never to become a grown-up.” 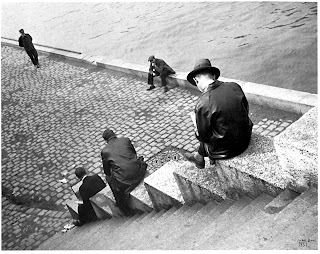 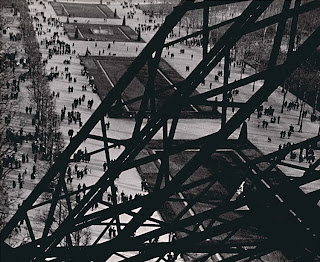 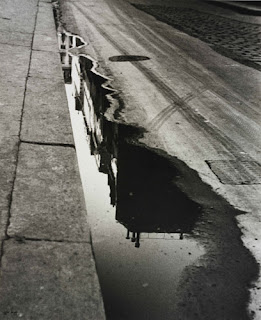 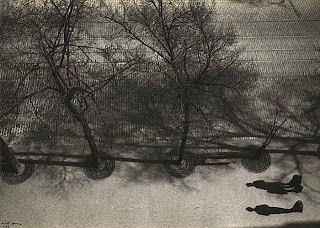 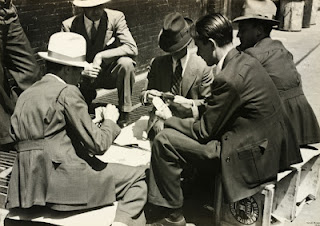 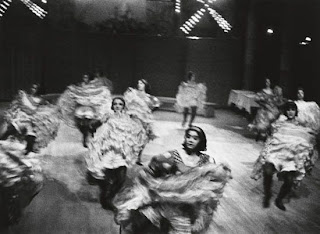 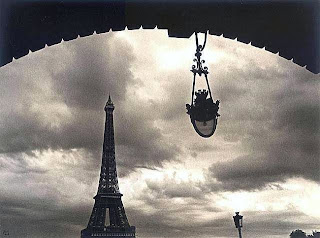 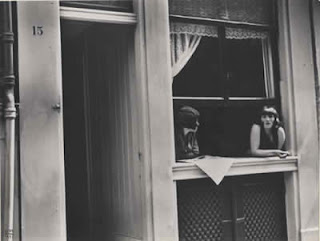 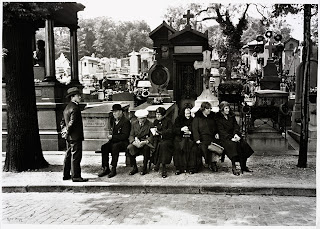 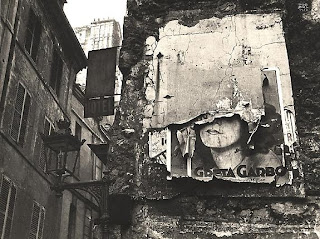 
Ilse Bing's biography from the Victoria and Albert Museum:

Ilse Bing was born into a comfortable Jewish family in Frankfurt-am-Main, Germany, in 1899. As a child, her education was rich in music and art and her intellectual development was encouraged. In 1920 she enrolled at the University of Frankfurt for a degree in mathematics and physics, but soon changed to study History of Art.

In 1924 she started a doctorate on the Neo-Classical German architect Friedrich Gilly (1772–1808). Needing to illustrate her thesis, Bing bought a Voigtlander camera in 1928 and started to teach herself photography. The following year she bought a Leica, the new and revolutionary 35mm hand-held camera that had been commercially introduced just three years earlier and enabled photographers to capture fast-moving events.

In 1929, while still pursuing her studies, Bing started to gain photojournalism commissions for Das Illustriete Blatt, a monthly supplement of the illustrated magazine Frankfurter Illustriete. She continued to provide regular picture stories for the magazine until 1931.

At this time, Bing also started collaborating with the architect Mart Stam, a prominent modernist who taught at the Bauhaus school of design from 1928-9 and was appointed chief architect to 'Das Neue Frankfurt' (a major construction project) in 1929. Stam commissioned Bing to record all of his housing projects in Frankfurt. He also introduced her to Frankfurt's avant-garde artistic circles, in particular that of artist Ella Bergman-Michel and her husband Robert, great patrons of the arts who frequently hosted artists such as El Lissitzky, Kurt Schwitters, Jean Arp and Hannah Höch at their house.

With her artistic horizons expanding and finding some commercial success, Bing finally gave up her thesis in the summer of 1929 to concentrate on photography - a rather shocking decision for a woman of her background that astonished her family. The following year, greatly impressed by an exhibition of modern photography in Frankfurt, especially by the work of Paris-based Swiss photographer Florence Henri, Ilse Bing decided to move to Paris, the capital of the avant-garde and epicentre of developments in modern photography.

Ilse Bing arrived in Paris at the end of 1930 and initially found lodgings at the Hotel de Londres, rue Bonaparte, an address recommended by her friend Mart Stam. The Hungarian journalist Heinrich Guttman, who she had met through the publisher of the Frankfurter Illustriete, found her work and lent her his garage to use as a darkroom in exchange for illustrations for articles Guttman wrote for mainly German newspapers. Bing also provided illustrations for a book published by Guttman in 1930 on the history of photography.

For the first couple of years in Paris, Bing still published her work regularly with German newspapers, continuing her association with Das Illustriete Blat. Gradually, she also started to publish work in the leading French illustrated newspapers such as L'Illustration, Le Monde Illustré and Regards, and from about 1932, increasingly worked for fashion magazines Paris Vogue, Adam and Marchal, and from 1933-4, American Harpers Bazaar.

When on assignment, Bing would take extra pictures that satisfied her own artistic interests, and she built up a large body of work for exhibition. During a commission to photograph the Moulin Rouge, she made a series of photographs of dancers which were exhibited in the gallery window at the newly-established publishers La Pléiade in 1931. This was her first exhibition. Later that year, her photographs were included in the 26th Salon Internationale d'Art Photographique, organised by the Société francaise de photographie. They quickly caught the attention of the photographer and critic Emmanuel Sougez who praised the dynamism of the photographs and christened Bing 'the Queen of the Leica'. Sougez continued to be an important and influential supporter of her work throughout the 1930s.

In 1931 Bing moved to 146 avenue de Maine. That year she also met the New York-based Dutch American writer Hendrik Willem van Loon who became her most important patron and introduced her work to American clients. Most importantly, Van Loon showed Bing's work to the collector and gallerist Julien Lévy who included her work in the exhibition Modern European Photography: Twenty Photographers at his New York Gallery in 1932.

During the 1930s Bing also frequently exhibited in Parisian galleries, where her work was shown alongside that of Brassaï, Henri Cartier-Bresson, Florence Henri, Man Ray and André Kértesz.

In 1933 Bing moved to an apartment at 8 rue de Varenne, where she was able to use the kitchen as her darkroom. Here she met her future husband Konrad Wolff, a German pianist also living in the same block of flats whose music she would hear drifting up to her flat. The photographer Florence Henri, whose work Bing had first seen in Frankfurt, also lived at 8 rue de Varenne. However, despite clear links between her work and that of Henri and other photographers from the period, including Kértesz, Bing later claimed that she had little contact with other photographers during her Paris days.

In 1936 Ilse Bing was given a solo exhibition at the June Rhodes gallery in New York. Hosted by her patron Van Loon, she travelled to the USA, where she stayed for three months, during which time she made photographs in New York and Connecticut.

Bing was greatly impressed by New York. She appears to have been enthusiastically received, and her visit aroused some public interest. In an interview in the New York World Telegraph, June 8th 1936 entitled 'Famous German Woman sees life in New York as Transitory and Wild', Bing spoke of her excitement with the 'jazz rhythm' of New York, and by the newness of American cities as well as the wildness of American nature. She saw the New York skyline as a hybrid of the two, stating that, 'I did not find the New York skyline big like rocks. It is more natural than that, like crystals in the mountains, little things grown up.'

Tellingly, Bing asked to be described as a 'German Jew', explaining that her family was still in Germany and that she was worried for their safety.

During her stay, Bing met Alfred Stieglitz, doyen of the American photographic world and great exponent of modern photography. This meeting was, she later stated, a major event in her life and we can see the influence of Stieglitz's vision on Bing's photographs of New York.

Characteristically, Bing also absorbed the aesthetics of other contemporary American artists - some of whom she met through Stieglitz - and her street scenes show the influence of the realism current in American art at that time.

In 1937 Ilse Bing married Konrad Wolff (she maintained her maiden name for her photographic activities, but also assumed the name Ilse Bing Wolff). Although she took fewer photographs during the latter years of the 1930s, she continued to find inspiration in Paris and undertook commissions, including stories on the Glyndeborne opera that were published in 1938, for which she made her only documented trip to the UK. Bing continued to be ranked among the leading photographers of the time, with her work included in an important survey exhibition 'Photography 1839-1937' at the Museum of Modern Art, New York, and the accompanying publication by Beaumont Newhall.

In 1938 moved Bing and Wolff moved together to boulevard Jourdan, hoping to live a comfortable married existence in their new, elegant apartment. However, the photographs Bing made of the splendid views across Paristowards Sacré Coeur from the balcony of this apartment were some of her last in Paris. The outbreak of the Second World War changed everything. In 1940 Bing and Wolff were forced to leave Paris and, both Jews, were interned in separate camps in the South of France. Bing spent six weeks in a camp in Gurs, in the Pyrenees, before rejoining her husband in Marseille, which was under 'Vichy' control. The couple spent nine months there, awaiting visas for America. Eventually, with the support of the fashion editor of Harpers Bazaar, they were able to leave for America in June 1941.

Although Bing had managed to take her negatives with her and keep them with her in the camp, she left all her prints behind in Paris in the safekeeping of a friend. This friend then sent them on to Marseille but Bing and her husband had left France before the photographs arrived. The prints remained in a shipping company's warehouse in Marseille, miraculously missing the many bombs that fell on the port, until the end of the War, when they were despatched to Bing in New York. Tragically though, when they arrived, Bing was unable to pay customs duty on all of them, and had to sift through the prints, deciding which to keep and which to throw away. Some of her most important vintage prints, including the only photographs Bing had taken in England, were lost at this time.

After a decade of relative obscurity, Bing held her first one-person exhibition in 17 years at the Lee Witkin Gallery in New York in 1976, the show that marked a revival of interest in her work. In the late 1970s, photography's status within museums was being re-evaluated, and this coincided with a renewed interest in those photographers like Bing whose careers had been somewhat interrupted by the Second World War, as well as feminist art history's interest in giving the careers of women artists due prominence.

In 1976 the Museum of Modern Art in New York acquired some of Bing's work. Her work was included in a touring exhibition, organised by the Art Institute of Chicago, about the art collection of Julien Levy. This collection, including a large number of Bing's prints, was eventually acquired by the Art Institute. From this point, Bing's work was exhibited more frequently in museums and commercial galleries and acquired by American and French museums. A major retrospective, 'Ilse Bing: Three Decades of Photography' was shown at the New Orleans Museum of Art in 1985 and then toured to the International Center of Photography in New York and the Kunstverein, Frankfurt in 1987. The Musée Carnavalet, Paris, followed in 1988 with a retrospective of Bing's photographs of Paris. This gradual growth of interest in Ilse Bing's work has re-established her reputation at the centre of the development of modern photography and ensured her a permanent place in the history of the medium.This text was originally written to accompany the exhibition The Ilse Bing: Queen of the Leica on display at the V&A South Kensington between 7 October 2004 and 9 January 2005.