Roy DeCarava on Masters of Photography
Roy DeCarava Photos of Harlem from Listicles, the "L" magazine 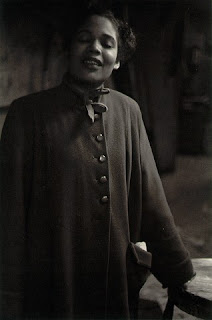 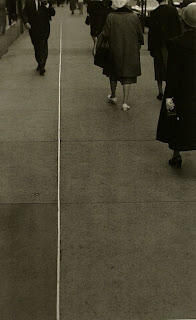 In the mid-1950s street photography was generally a documentarian’s medium, useful in the service of social change. Yet Roy DeCarava was as preoccupied with light and shade as with his insider’s view of a down-at-heel, largely African-American New York neighbourhood.

He was mentored early in his career by Edward Steichen, but went on to forge a unique identity as a master of formal composition. Trained as a painter and printmaker, DeCarava was influenced by Rembrandt and Michelangelo. He used velvety greys and stark contrasts of light and shade to endow his images with sculptural dimension and drama. Shooting in ambient light, he printed in such a way as to coax light and dark from his picture, so that a child walking down a Harlem street might be bathed in celestial light and surrounded by menacing shadows.

Troubled by the absence of beautiful, complex images of African Americans, DeCarava had stepped in. During the 1940s, 1950s and 1960s he revealed hidden corners of Harlem — subway stations, restaurants, apartment interiors — to viewers who would not otherwise have had exposure to that world. Unlike many of his contemporaries, he did so not as a consciousness-raising exercise. His photographs were intended to stand on their own, outside a sociological or missionary context, as works of art.
Seeking and winning a Guggenheim fellowship in 1952, at Steichen’s encouragement, DeCarava wrote in his application that his goal was to provide “penetrating insight” into black culture. But he also aimed to depict his black subjects in a “serious and artistic way”.

His 1955 book The Sweet Flypaper of Life, done in collaboration with the poet Langston Hughes, was a bestseller, and DeCarava’s work was widely exhibited and acclaimed. But he did not always make commercial approval his priority. Though many of his portraits were of African Americans, he resisted being identified and marketed as a “black artist”, and he doggedly guarded control over the presentation of his work, once withdrawing from an exhibition at the Metropolitan Museum of Art. The 1969 Met show, “Harlem on My Mind”, had failed to include the views of black civic leaders in its planning stages. DeCarava, invited to contribute his work, instead joined the picket line.

Roy Rudolph DeCarava was born in Harlem in 1919, the only child of a Jamaican single mother, Elfreda Ferguson. He attended vocational school, all the while doing odd jobs — shining shoes, delivering ice — to help meet expenses. A teacher from his New York public school once came to the house and urged his mother to foster his artistic talent.

His mother, herself an amateur photographer, provided art supplies and music lessons, and DeCarava gained admission to the Cooper Union, the prestigious institute in Manhattan, to study art and architecture. After two years there, discouraged by what he described as a hostile reception by the overwhelmingly white student body, he attended the Harlem Community Art Centre. While studying painting there, he also made signs for the Works Progress Administration, a project of Roosevelt’s New Deal.

DeCarava briefly served in the Army during the Second World War as a topographical draughtsman, then worked in New York as a painter and commercial illustrator. Initially using photographs as references for drawings, he was drawn to the immediacy of the photographic medium. Despite the painterly appearance of his work — with forms seeming to emerge from darkness by happenstance — his methods were precise and premeditated, reliant on darkroom techniques that changed the balance of light and shade after the fact.

In 1955 he opened an exhibition gallery in his apartment, showing the work of Berenice Abbott and other masters along with his own. Despite critical praise, sales were poor, and he closed the space after two years. A decade later he founded the Kamoinge Workshop (the name is a variation of the term “group effort” from the Bantu language of Kenya), giving young black photographers a place to show their work. During the civil rights movement of the 1960s DeCarava recorded scenes that grabbed his attention. In one image, Force, Downstate, (1963) a woman is grasped by the ankles and dragged off by police.

Starting in the late 1950s, DeCarava was employed as a photojournalist for Look and Newsweek magazines and, in the 1960s and 1970s, for Sports Illustrated. In the magazine world he encountered enough racism that, for three years in the mid-1960s, he was prompted to chair the American Society of Magazine Photographers’ Committee to End Discrimination Against Black Photographers. Magazine art directors, he said in a television interview in 1996, “were not used to seeing black artists walk through the door with a portfolio of photographs”, and some were “literally shaking” when they saw his work. DeCarava was engaged in a longstanding dispute with Gordon Parks, another pre-eminent black photographer, who did not agree with him about discrimination in their milieu.

Feeling constrained by the institutional structures and deadlines of journalism, DeCarava eventually gave up editorial work to teach at Cooper Union in the late 1960s and, beginning in 1975, at Hunter College. His work was the subject of a major retrospective at the Museum of Modern Art in New York in 1996. Throughout his career he returned to his native Harlem for material and inspiration. Prominent African Americans — Lena Horne, Ella Fitzgerald, Duke Ellington, Miles Davis — were subjects of his portraits. Yet some of his most famous images were of anonymous, wistful figures — like a young girl in a white graduation dress, shrouded in bright light, juxtaposed with a garbage-strewn urban lot. She lifts her hem delicately, in an apparent rebuke to the impurity around her.

According to Peter Galassi, a curator at New York’s Museum of Modern Art, DeCarava was “looking at everyday life in Harlem from the inside, not as a sociological or political vehicle”. In a 2006 interview the photographer described the essence of his art as “taking what is and making it yours”.
His wife, Sherry Turner, an art historian, survives him, together with four children.