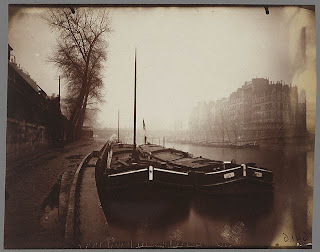 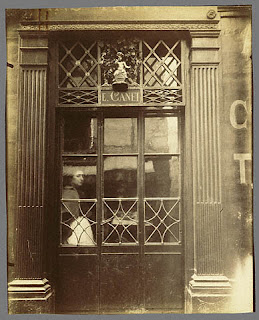 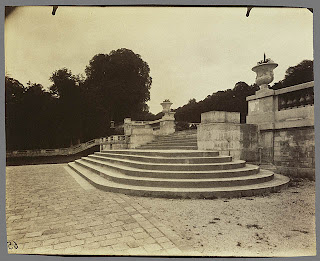 Atget Biography from Atget.com:﻿
French, 1857-1927:  The life and the intention of Eugene Atget are fundamentally unknown to us. A few documented facts and a handful of recollections and legends provide a scant outline of the man.  He was born in Libourne, near Bordeaux, in 1857, and worked as a sailor during his youth; from the sea he turned to the stage, with no more than minor success; at forty he quit acting, and after a tentative experiment with painting Atget became a photographer, and began his true life's work.
Until his death thirty years later he worked quietly at his calling. To a casual observer he might have seemed a typical commercial photographer of the day. He was not progressive, but worked patiently with techniques that were obsolescent when he adopted them, and very nearly anachronistic by the time of his death. He was little given to experiment in the conventional sense, and less to theorizing. He founded no movement and attracted no circle. He did however make photographs which for purity and intensity of vision have not been bettered.
Atget's work is unique on two levels. He was the maker of a great visual catalogue of the fruits of French culture, as it survived in and near Paris in the first quarter of this century. He was in addition a photographer of such authority and originality that his work remains a bench mark against which much of the most sophisticated contemporary photography measures itself. Other photographers had been concerned with describing specific facts (documentation), or with exploiting their indivisual sensibilities (self-expression). Atget enconpassed and transcended both approaches when he set himself the task of understanding and interpreting in visual terms a complex, ancient, and living tradition.
The pictures that he made in the service of this concept are seductively and deceptively simple, wholly poised, reticent, dense with experience, mysterious, and true.
Atget Biography from Photo-Seminars.com:
Eugene Atget photographed Paris for thirty years. With a singleness of purpose rarely excelled, he made his incredible monument to a city. When he died in 1927 he left approximately 2000 eight by ten inches glass plates and almost 10,000 prints, not counting the plates deposited in the Palais Royale archives. Here is one of the most extraordinary achievements of photography. Yet we know almost nothing of Atget as a person and less of Atget as a photographer. His history is to be read in his work.

Eugene Atget Life:  Atget was born in Bordeaux in 1856. An orphan, he was brought up by an uncle. At an early age he shipped to sea as cabin boy. Doubtless his early experiences made a deep impression and enriched his vision of the world, for in later years he vividly recited to friends amusing anecdotes of this period. Early in his life his faculties of observation were sharpened and developed.
As a young man, he turned to the stage, first in the French provincial cities then in the suburbs of Paris. His physique fitted him only for the less attractive roles usually the villain’s part. As maturity approached, acting became an unrewarding occupation. To what should he turn? He had a lively liking for painting and associated a great deal with painters. He considered being one of them and indeed tried his hand at painting, a number of examples of his own brushwork were found at his studio upon his death.
Finally he decided to be a photographer, an art photographer. He already had an ambition to create a collection of all that was artistic and picturesque in Paris and its surroundings. An immense subject. Atget obtained equipment and with a sack full of plates on his back "started off." Thus began a vast esthetic documentation, a labor of love for thirty years.

It is necessary to qualify the meaning of "art photographer" as well as "esthetic" documentation, since these terms mean different things to different people. Never was Atget "arty." His art stems from his grasping of the photographic medium without confusion or imitation of painting. His vision, backed by heart and brain, mature sensitivity and above all selectivity was well synthesized and projected for the beholder to understand and thereby to be enriched. Maturity, in this case, was not a handicap but a powerful ingredient.

Armed with the experience of travel, observation, and drama, Atget photographed the monuments of Paris, houses, sites, chateaux, streets, subjects about to disappear. Photography was no more materially rewarding than acting. Nevertheless he persevered, lugging his unwieldy view camera and heavy glass plates. One day Luc-Olivier-Merson bought a print for fifteen francs. Atget rejoiced and was encouraged. The playwright Victorien Sardou became interested in his work and put him on the track of vanishing Paris. Before the World War of 1914-1918, Atget was gradually winning recognition and financial support.

But the war broke out "the second that Atget had seen. He had a horror of it, he loved his work so much." People thought he was a spy or lunatic. He no longer sold anything when there was peace again, he was an old man. He produced less and less, lived, as it were, on his capital of old work. The archives of the Palais Royale acquired some of his plates, but at low prices and purely for their record value. So Atget’s life moved to its close: In 1927 he died, without public recognition or understanding of the vast importance of his work.

Atget’s Photography:  Atget assigned himself an alluring and provoking subject, the city of Paris, the dream city of thousands of struggling, aspiring, gifted and would-be poets, painters, composers. Paris, the city of art and bridges over the Seine, of boulevards and cafes, of narrow, crooked streets and gray plane trees in the beautiful Luxembourg gardens.

To Atget, Paris was not a dream but an actuality a fact of hard material expressions, of strange contrasts and contradictions. It was weathered, eroded facades of mansion and humble dwelling; ornate construction of wrought iron grilles and balconies; fantasy of shop signs and carousels; visible magic of rich grapes, cherries, cauliflower’s, lobsters, heaped in luxuriance in Les Halles; formal elegance of Versailles and the Trianon; rustic primitiveness of a plow lying in furrows outside the fortifications; outmoded forms of carriage and horse-drawn cabriolet; excitement of an eclipse seen by crowds in the Place de l’Opera; a thousand and yet another thousand images of the miracle of daily reality.

In recreating Paris for us and for all time, Atget gave it permanent reality by utilizing photography in its own right. He did not veer toward excessive concern with technique nor toward the imitation of painting but steered a straight course, making the medium speak for itself in a superb rendering of materials, textures, surfaces, details. Within the limits of his equipment, he recorded all phases of the life about him: people, street activity, the city proper.
Atget’s Equipment:  The photographs reveal Atget’s method of work. His equipment consisted of a simple 18 X 24 cm view camera, with almost none of the present-day adjustments. It had a rising front, as may be seen by the photographs, many of whose corners have been cut off because the lens did not give full coverage. He had no wide-angle lens. The focal length of his lens is unknown, but it must have been between eleven and twelve inches. Atget used glass plates. As for accessories, he certainly did not use an exposure meter. At most he made use of a simple coefficient table with mathematical calculations. But it is more likely that he judged exposure by his vast experience with light conditions, subject matter, and type of plate emulsion. Because the emulsion used then were non-color-sensitive, he never used filters. For interior work, he used no artificial light of any sort but availed himself always of natural light. Any shutter used with the lens was at most a simple bulb shutter. Atget made a practice of closing down to a small aperture if conditions permitted. Only when he photographed people did he open up the diaphragm and focus critically on the center of interest, leaving the background out of focus. It is doubtful if his lens could have been faster than 1/11 at its widest opening. It would seem from the photographs themselves that most of them were taken during the summer months when the sun’s actinic rays are stronger. Also most of the human figures of these series are posed to the extent that Atget probably asked them "to hold still a moment."

Because he did not have the advantage of fast lenses and fast emulsions, Atget had to solve his photographic problems within the capacities of his materials. Since his equipment and materials were not adequate to stop fast action, he worked a great deal in the early hours of the day, rising at dawn.

Atget’s photographs are the supreme proof that photography is more than a "machine." Except for the complex factors of stopping motion, Atget found no obstacle to making his photographs an extremely expressive comment on life. Not the camera, but Atget himself dictated what would be set down in these beautiful prints. The intensity of his purpose and vision was the powerful drive which compelled him to undergo long years of neglect and hard work. At the same time he accepted the tremendous labor of his method, carrying the cumbersome view camera many miles, weighed down by bulky glass plates. For him the camera was but an instrument for expressing his intense awareness of life.

In personal matters Atget was, if not an eccentric was uncompromising. From the age of 50, he lived solely on milk, bread, and pieces of sugar. He was absolute in hygiene and in art. This determination when applied to photography created a unique monument.
Posted by John A Benigno at Tuesday, February 08, 2011