﻿"Every ten years a man should give himself a good kick in the pants."

"Photography records the gamut of feelings written on the human face, the beauty of the earth and skies that man has inherited, and the wealth and confusion man has created. It is a major force in explaining man to man." 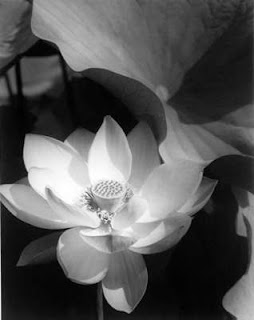 Edward Steichen Biography based on the catalogue from the Whitney Museum of American Art retrospective curated by Barbara Haskell (quoted from Cosmopolis Magazine):
Since Edward Steichen's (1879-1973) death, prohibitions against reproducing his works have discouraged scholars from undertaking a broad-based analysis of his career and work. The exhibition by curator Barbara Haskell at the Whitney Museum of American Art is the first comprehensive survey since 1961. By permission of Joanna Steichen, sixteen photographs of her late husband could be reproduced in the exhibition catalogue.

Edward Steichen is considered one of the outstanding photographers of the 20th century. He was born in Luxembourg in 1879 to Marie Kemp and Jean-Pierre Steichen. A year later, his father sailed to America and settled in Chicago. When he stopped writing home, Marie followed him with Eduard - his name was later anglicized to Edward. She found her husband in poor health and nearly penniless. In 1881, the family moved to Hancock, Michigan, where Jean-Pierre worked in the copper mines and Marie opened a shop. Two years later, Edward's sister Lillian, later known as Paula, was born. In 1888, Edward boarded at Pio Nonno College and Catholic Normal School near Milwaukee. The following year, the family moved to the city of Milwaukee. In 1894, Edward graduated from eighth grade in Milwaukee's public school.

The same year, he began a four-year apprenticeship at the American Fine Art Company, a Milwaukee lithographic firm. In 1895, he obtained his first camera and supplemented his wages by taking photographic portraits. In 1896, he organized the Milwaukee Art Student's league and became its president. Edward studied painting and drawing under Robert Schade and Richard Lorenz. A year later, he exhibited his paintings at Gimbel's department store in Milwaukee. In 1899, he had three photographs in a juried exhibition at the Second Philadelphia Salon. In 1900, with another three photographs, he participated at the first Chicago Photographic Salon. He received mention in several reviews.

By 1899, Steichen had become a Pictorialist photographer who created soft focus, dreamlike, mysterious and evocative images. Until the First World War, he favored mystery over precision and reverie over reason. This spiritual and intuitive approach responded to the turn of the century taste with its warnings against the dangers of materialism and rationality.

In spring 1900, he resigned from the American Fine Art Company and, on the way to Paris to study art, stopped in New York City where he met Alfred Stieglitz, who purchased three photographs. In July, he sailed to Paris with artist friend Carl Björncrantz. In autumn, he exhibited 21 photographs at The Royal Photographic Society in London. In 1901, a version of the exhibition with 35 Steichen photographs opened in Paris.

In 1901, Edward exhibited his painting Portrait of F. Holland Day in the annual juried Salon des Champs de Mars. In the autumn, he began to attend the Saturday gatherings of the sculptor Auguste Rodin in the Paris suburb of Meudon. In November, some of Edward's landscape photographs featured in Charles Caffin's book Photography as a Fine Art.

In 1902, Steichen helped to establish the Photo-Secession, a group of photographers led by Alfred Stieglitz committed to advancing photography's status as a fine art. Edward designed the cover and typography of Camera Work, a new quarterly photography magazine edited by Stieglitz. In March, the jury of the Salon the Champs de Mars removed ten photographs by Steichen from the exhibition when they discovered that they were not engravings as declared by Edward.

In the summer, Steichen returned to New York where he opened a commercial photography studio on Fifth Avenue. In 1903, Camera Work dedicated its second issue to Steichen's photographs. In October, Edward married Clara E. Smith. In 1904, their first daughter, Marry, was born. The same year, Steichen experimented with color photography. In 1905, he had a successful exhibition of paintings at Eugene Glaenzer and Co. Galleries in New York. At the end of the year, he designed the galleries and installation of The Little Galleries of the Photo-Secession at 291 Fifth Avenue, soon known as "291".

Steichen was a master of female nudes lost in innocent reverie and portraits of the era's eminent men of arts and letters. He worked with unmanipulated and manipulated printing techniques. He introduced color in his finished prints to intensify, thin out, shade or remove portions of the image with a brush or scraping tool. It lent his works the appearance of drawings or lithographs. Together with his soft and mysterious touch, it made Steichen the enfant terrible for purists among photographers and critics.

Between the the outbreak of the First World War in 1914 and his commission as a first lieutenant in the Army Signal Corps in July, Edward abandoned the Pictorialist style and technique in favor of strong light-dark contrasts and sharply focused effects. When he resumed photography after the war, he pursued this new direction. He began to create monumental images and photographed organic, natural forms; only occasionally did he turn to architectural forms of the city.

In 1922, Steichen divorced from Clara and returned from France to New York where, in 1923, he married Dana Desboro Glover. Steichen became the chief photographer for Condé Nast (1923-38). He produced monthly celebrity portraits for Vanity Fair and fashion spreads for Vogue. Edward was considered the most glamorous name in photography - and the best paid. But his merger of commerce and high art made him a controversial figure. His celebrity images. . .are unsurpassed. By 1927, he relied on artificial illumination for dramatic oppositions of light and dark. It lent them a look of modernity and elegance, in accordance with Hollywood glamour and the streamlined art deco design aesthetic of the late 1920s and 1930s. At Vogue, Steichen redefined fashion photography and proposed a new prototype of the confident, bold and independent female beauty. He refused to distinguish between commercial and high art. Therefore, many colleagues, including Alfred Stieglitz, chastised him for forsaking the ideals of art for money. In 1930, he published, together with his daughter Mary, The First Picture Book: Everyday Things for Babies.

In the last decades of his career, Steichen shifted his aesthetic preference again as he came to consider photography as a force not of commerce, but of social awareness. During the Second World War he implemented this belief in socially responsive art as commander of the Naval Aviation Photographic Unit. After the war, he created a new form of photographic exhibition intended to transform public consciousness through words and sequenced pictures. 1955's exhibition The Family of Men was the most celebrated one, a photographic argument for the oneness of humanity and the universality of everyday experience. The 503 photographs by 273 artists from 68 countries was arranged around 37 themes, such as marriage, childbirth, work, religion and death. The exhibition drew record crowds and circulated around the United States and to 84 foreign venues over the next decade.

In 1947, Steichen was appointed Director of the Department of Photography at The Museum of Modern Art in New York City. Only after 1955 did he commit himself again to photography, working exclusively with color film. His only subject was a shadblow tree which he could see from the windows of his home in West Redding. Steichen photographed it in all seasons and hours of the day in order to evoke life's cycles of change and growth. In 1959, he began filming the shadblow tree with a movie camera. Two years later, ill health forced him to abandon the project. In 1957, his second wife Dana died. In 1960, he married Joanna Taub. Two years later, he retired form the MoMA, where, in 1964, he opened the Edward Steichen Photography Center. In 1973, Steichen died at the age of 94.
Posted by John A Benigno at Sunday, February 27, 2011