"I wish to blur the firm boundaries which we self-certain people tend to delineate around all we can achieve." 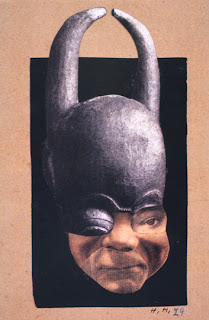 Hannah Höch biography from the review of "The Photomontages of Hannah Höch" by Missy Finger, Co-Director, Photographs Do Not Bend Gallery, Dallas, Taxas.  Featured are essays by Peter Boswell, Maria Makela, Carolyn Lanchner.

Hannah Höch, an artist mostly known as the sole female member of the Berlin DADA movement, was a pioneer of photomontage. The complex imagery of her montage work explores her fragmented life as a woman within a male dominated art movement and pre-war and post-war society in Germany. The book was published in conjunction with an exhibition which specifically chronicles her artistic career in photomontage, even though she was working with other media such as painting, water-color, and drawing throughout her life. The exhibition was organized by the Walker Art Center in Minneapolis and traveled to The Museum of Modern Art (MOMA) and the Los Angeles County Museum afterwards last year.

The extraordinary book includes three essays that analyze Höch's career from pre-World War II Germany to post-war Germany, with over 100 color reproductions of the montages, a great asset to this book. It also includes a fully illustrated chronology of Höch's life.

The term photomontage is a term coined by the Berlin Dadaists that translates as a piecing together of photographic and typographic sources. The exhibition included the most memorable and largest photomontage (44 7/8 x 35 7/16 inches) from her DADA years, Schnitt mit dem Küchenmesser Dada durch die Letzte Weimarer Bierbauchkulturepoche Deutschlands (Cut with the Kitchen Knife Dada through the Last Weimar Beer-Belly Cultural Epoch of Germany) from 1919-1920. This belongs to the National Gallery, Berlin, and was seen only in the MOMA venue in New York.

Berlin DADA members included Raoul Hausmann, Hannah's lover for seven years, John Heartfield, George Grosz, Johannes Baader, and Richard Huelsenbeck. The group dealt with social and political issues in their art with a zest for breaking conventions. Painting was bourgeois and their anti-art generated new media including found objects. It is interesting to note that Hannah Höch and Raoul Hausmann developed the montage idea while on vacation in 1918 in a town on the Baltic Sea, Heidebrink. There they found a technique of engraving which placed photographic portraits of heads of local men away at war atop a generic, uniformed torso.

Tracing Höch's career as a DADA member, the book asserts the fact that her male counterparts marginalized her participation. This was during the time in Europe that women were given suffrage, magazines were being published for women, and Höch was using this epochal time as material for her art.The rigid gender roles are toyed with in a destructive manner, often placing a woman's head or legs on a male body, and vice versa.

In the post-war era, she infuses African art in her Ethnographic Museum series we note that women are justaposed with primitive imagery, relating women's slow progress in contemporary German culture. An interesting example of this period of work can be seen at the Modern Art Museum of Ft. Worth, Liebe im Busch 1925 (Love in the Bush).

Höch was born in the small town of Gotha in 1889. She later pursued the applied arts, rather than fine arts, as a more practical career choice for a woman at that time.She was employed by Ullstein Press designing dress and embroidery patterns for Die Dame (The Lady) and Die praktische Berlinerin (The Practical Berlin Woman). Working for the company that publishes BIZ, Der Querschnitt and Uhu, gave Höch the source material for her montage work. The exhibition book sometimes illustrates the original photograph that Höch used for a particular montage, giving us the advantage of seeing her clever, but complex manipulation of form and images.

Her art throughout her life reflects many influences of style, from constructivism to surrealism to futurism. We can see the roots of Robert Rauschenberg's massive scale collages of the sixties, and we can also appreciate that Pop Art has its roots in DADA.

Later montages by Höch become less cutting, more humorous. She inscribes at the bottom of a drawing from 1969, Dank für die Zeitschriften (Thanks for the magazines)--the source for these photomontages that are published in this scholarly book and exhibition.

For people associated with the Goethe Center, it might be interesting to note that in 1985, the West German government showcased Hannah Höch in a program of traveling exhibitions to introduce 20th Century German art to non-German audiences, the New York Goethe House being one venue in 1992. Now there are several books written about Höch in the English language. Many of the collages illustrated in this book were selected from the collections of the following German museums: Berlinische Galerie, Landesmuseum Für Moderne Kunst, Photographie und Architektur, Berlin; Staatliche Museen Zu Berlin, Kupferstichkabinett; Institut Für Auslandsbeziehungen, Stuttgart; and the Germanisches Nationalmuseum, Nuremberg.