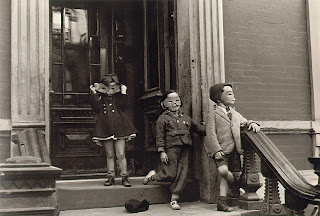 Helen Levitt made her mark on photography during a volatile time in America. The social crisis of the 1930's inspired photographers to work for government funded projects to expose and correct the social problems. Walker Evans documented the rural south and Lewis Hine labor conditions while Dorothea Lange revealed urban plights. Helen Levitt chose a different path. At age 23 the subject she'd singularly devote a long career was located just blocks away in the children of New York neighborhoods.

As a child raised in Brooklyn, NY she had a fascination with sounds, dance, books and foreign films. Feeling unstimulated at school she left before graduating and went to work for a commercial photographer gaining technical knowledge over the next four years. Her self-taught education aligned her with Henri Cartier-Bresson and Walker Evans. Cartier-Bresson's work taught her three lessons: a blunt photographic record of ordinary facts could reveal the mystery and fantasy within daily life; that the poetry in such pictures turned its back on conventional value systems and notions of beauty; and that this art, which trafficked in the momentary, was not haphazard.

Flooding herself with art exhibits, photography, theater performances and film created for Helen a personal photo-learning experience. In 1936 she purchased the same compact Leica Cartier-Bresson used and attached a right-angle viewfinder. The equipment was central in her ability to maneuver through the neighborhood streets and photograph the natural choreography of children at play. She could remain on the fringes without disturbing the ongoing reality. This method of street photography complemented her respect for the privacy of her subjects. Being so consumed with one specific subject, a career in photojournalism held no interest for her.

"Levitt is not concerned with the popularity of her work now, nor has she ever been. She knows that what separates her from others is what makes her an artist, and that what brings her into closest intimacy with them is her wit," said Maria Morris Hambourg, curator in charge of the Department of Photographs at The Metropolitan Museum of Art in New York City. "She has little faith in opinions or interpretations other than her own, and she wishes to live without the intrusions of publicity. She asks that we trust the pictures, not the words."

When I contacted Levitt's New York gallery for access to additional images not surprisingly I was denied. However, I did learn at 87 Ms. Levitt is in stable health and working on projects. Her photographs can be enjoyed on several Web sites and books In the Street, Photographers on Photographers, Helen Levitt: Mexico City, and A Way of Seeing.  (Editors note:  Helen Levitt passed away on March 30, 2009 at the age of  95.  Here's a link to her New York Times obituary.)

A theme of her New York work is the doorway as a threshold from private to public space, but her images will confirm as city dwellers can attest, neighborhood stoops, sidewalks and streets can be quite an intimate setting. Her black and white shots are almost all exterior, at a medium distance from the subjects and depict the self at its most extroverted, surreal, natural state, children at play. Levitt's found children are emotional, masked, climbing, miming, dancing, dreaming and acting. The space in her images have been described as stage-like and its inhabitants an unending cast of characters before, during and after the transformation. What I appreciate about her work is an involvement by the viewer in a private, mischievous moment of self-discovery. Levitt doesn't manipulate the situation, rather anticipates it and removes evidence of herself as photographer so we can enjoy a new moment we wouldn't have otherwise.

"Helen Levitt's extraordinary gift is to perceive in a transient split second, and in the most ordinary of places - the common city street - the richly imaginative, various, and tragically tender moments of ordinary human existence," said poet Wallace Stevens. (Colleen Carroll)