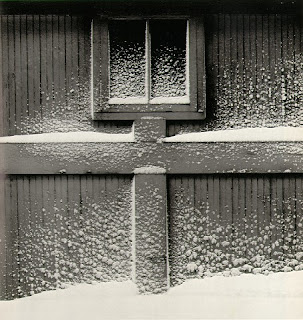 Minor White was born in Minneapolis, Minnesota in 1908. He studied botany at the University of Minnesota and worked for a few years on odd jobs before he started concentrating on photography. He worked as a photographer for the Works Progress Administration in Oregon from 1938 to 1939. From 1942 to 1945 he served as an infantryman in the Philippines. In 1945, White did his studies with Edward Weston, which was extremely intense due to the tonal beauty of his photographs. He then proceeded to work on a tenure with Alfred Steiglitz. It was at this time when White's photographs began to reflect on spiritual issues, including Roman Catholicism, Zen Buddhism, and mysticism.White believed that taking photographs and examining photographs was a spiritual act.

In 1945, White moved to New York City, where he studied at the University of Columbia. In 1946 he was united with the faculty of the California School of Fine arts where he worked as an assistant to Ansel Adams. While working with Adams, White co-founded the magazine 'Aperture' with Adams, Lange, and Beaumont and Newhall. White eventually succeeded Adams and became the Director of the California School of Fine Arts. From 1953 through 1965, White worked at the Eastman House and taught at the Rochester Institute of Photography. White edited much of Aperture during these years and much of his significant work was produced during this period, including "Windowsill." In 1965, White became professor of photography at the Massachussets Institute of Technology (MIT), where he served until 1976 when he passed away.

White's nature studies are so devotedly observed abstractions. However, to the male nude figure study, he brought a lyrical passion, and unmatched eroticism. White's writings emphasized and promoted his ideas as in Mirrors, Messages, and Manifestation. Undoubtedly, Minor White's work in photography altered the medium forever.
Posted by John A Benigno at Monday, December 27, 2010