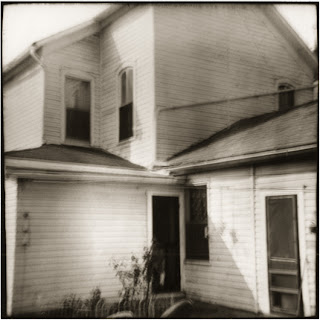 ﻿Review from New York Times:
It is easy to imagine discovering Nancy Rexroth's haunting and beautiful photographs in an old album in your parents' attic. They look as if a child in the 1950's took the photographs with a new Brownie camera. Images of empty, strangely luminous bedrooms, old clapboard houses, children at play and views of a small town are blurry and often obliquely framed, as if they been made by someone na?ly experimenting with a camera for the first time.

In fact, Ms. Rexroth created the series titled ''Iowa'' from 1971 to 1976, when she was in her late 30's. She used a toy camera called a Diana, and though she shot all the pictures in rural Ohio, she wanted to evoke memories of her childhood in Iowa in the late 1940's and early 50's. As much as they are about autobiographical memory and nostalgia, however, her pictures are about the talismanic role played by photographs in the emotional lives of modern people. Soon Cindy Sherman, Richard Prince and countless other simulators and appropriators would begin to explore what and how photographs of all types mean and feel, and photography about photography would eventually become a familiar academic genre. Anticipating that trend, Ms. Rexroth's ''Iowa'' still feels like something poetically rich and urgently new.