George Tice at 70: From Gallery 270
George Tice Amish Collection: From After Image Gallery 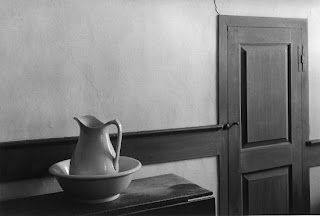 From The J. Paul Getty Museum:
﻿Tice was born and raised in Newark, New Jersey--the state in which his ancestors had settled generations earlier. At fourteen, he joined a camera club. A turning point in his self-training happened two years later, when a professional photographer critiquing club members' work praised his picture of an alleyway. Tice briefly studied commercial photography at Newark Vocational and Technical High School; he then joined the Navy. A published image he made of an explosion aboard an American ship caught the eye of photographer Edward Steichen, who purchased it for The Museum of Modern Art. For about a decade, Tice worked as a portrait photographer and helped establish a gallery. That success enabled him to concentrate on personal projects.

In the 1960s, Tice shifted from smaller camera formats to larger ones, which enabled him to craft carefully toned and detailed prints. He portrayed traditional Amish and Shaker communities, as well as the hard lives of fishermen in Maine. In the 1970s, Tice began exploring his home state. Those photographs formed the beginnings of his Urban Landscapes series, which he worked on until the year 2000. His publications include: Fields of Peace: A Pennsylvania German Album (1970), Paterson, New Jersey (1972), Seacoast Maine: People and Places (1973), Urban Landscapes: A New Jersey Portrait (1975), and Hometowns: An American Pilgrimage (1988). Tice has taught at the Maine Photographic Workshops since 1977.
Posted by John A Benigno at Saturday, December 25, 2010