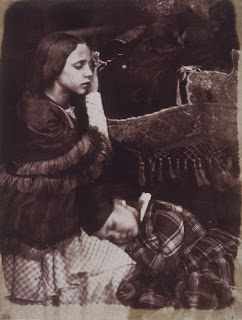 
Scottish photographers. David Octavius Hill (b. 1802, Perth, Perthshire, Scot. — d. May 17, 1870, Newington, near Edinburgh), originally a painter, was a founding member of the Royal Scottish Academy and its secretary for 40 years. In 1843 he enlisted the help of Robert Adamson (b. 1821, Berunside, Scot. — d. January 1848, St. Andrews), a chemist experienced in photography, in photographing the delegates to the founding convention of the Free Church of Scotland. They used the calotype process, by which an image was developed from a paper negative. In these and other portraits they demonstrated a masterly sense of form and composition and a dramatic use of light and shade. Their five-year partnership resulted in some 3,000 photographs, including many views of Edinburgh and small fishing villages. Before Adamson died at age 27, they produced some of the greatest photographic portraits of the 19th century.
Posted by John A Benigno at Friday, December 24, 2010