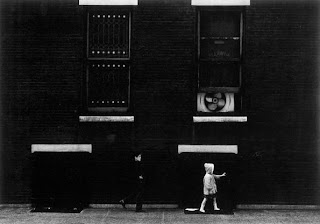 Ray Metzker Biography from The Museum of Contemporary Photography:

Ray Metzker’s images question the nature of the photograph and photographic “reality.” Through cropping, multiple imagery, and other formal inventions, his work explores options for transforming the vocabulary of the photograph. “Untitled” from 1969 illustrates the simple method of manipulating objective information through juxtaposition: two distinct women on the beach enter into a yin-yang relationship of line and gesture. The photograph is part of a series of pictures made from 1968 to 1975 of beach-goers in New Jersey. “The more fashion conscious probably go to other beaches, but what Atlantic City has – and what attracted me to it – is diversity,” Metzker said. Of the content of the pictures and his working method, Metzker added, “What appears in the pictures was the subject’s decision, not mine. I took what they presented – delicate moments – unadorned and unglamorous, yet tender and exquisite.” Metzker used a 1975 National Endowment for the Arts fellowship to pull the series together as Sand Creatures, later published as a book in 1979.

In a July 1992 letter, Metzker wrote the following about two untitled Sand Creatures pictures from 1969: “The photograph of the double image is from the series entitled Couplets and predates the single image by a number of years. Both pictures were made at beaches along the New Jersey coast: the couplet at Atlantic City, the single frame at Cape May. With both, my camera was an Olympus half-frame, a small amateurish piece of equipment that let me move about freely. The choice of the camera was essential to the development of the series.”

Metzker has dedicated his career to exploring the formal potentials of black-and-white photography, but they are not his exclusive concern. “When you look at the multiples, you are aware of patterning and so forth,” he says, “but there is still identifiable subject matter; frequently there are people there; there is a rhythm to those people.” Metzker’s 1959 thesis project, My Camera and I in the Loop, takes downtown Chicago as its subject, but renders it in experiments that tell more about photography than they do about the city. The pictures from this project were exhibited at the Art Institute of Chicago (1959-1960), and included in the issue of Aperture devoted to the students and professors of the Institute of Design at the Illinois Institute of Technology in Chicago (1961).

Born in Milwaukee on September 10, 1931, Ray K. Metzker began to photograph at age fourteen, studied art at Beloit College, Wisconsin (BA, 1953), and studied photography at the Institute of Design, Illinois Institute of Technology, Chicago (MS, 1959). He has taught at the Philadelphia College of Art (1962-1980), the University of New Mexico (1970-1972), and Columbia College Chicago (1980-1983). Metzker left teaching in 1983 in order to photograph full-time. He is the recipient of two John Simon Guggenheim Memorial Fellowships (1966 and 1979) and two National Endowment for the Arts fellowships (1974 and 1988). Metzker’s photographs have been shown in more than 47 one-person exhibitions, including such venues as the Art Institute of Chicago; Cleveland Museum of Art; High Museum of Art, Atlanta; Museum of Fine Arts, Houston; and Museum of Modern Art, New York. More than 45 collections include his work, among them are the Australian National Gallery, Canberra, New South Wales; Bibliothéque Nationale, Paris; Center for Creative Photography, University of Arizona, Tucson; Los Angeles County Museum of Art, The Metropolitan Museum of Art, New York; Museum of Modern Art, New York; Tokyo Metropolitan Museum of Photo; Whitney Museum of American Art, New York; National Museum of American Art, Smithsonian Institution, Washington, D.C.; Museum of Fine Arts, Boston; and San Francisco Museum of Modern Art. Metzker lives in Philadelphia and Moab, Utah.
Posted by John A Benigno at Thursday, January 13, 2011