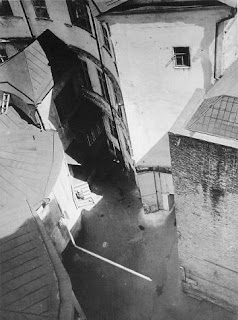 Rodchenko was one of the most versatile Constructivist and Productivist artists to emerge after the Russian Revolution. He worked as a painter and graphic designer before turning to photomontage and photography. His photography was socially engaged, formally innovative, and opposed to a painterly aesthetic. Concerned with the need for analytical-documentary photo series, he often shot his subjects from odd angles -- usually high above or below -- to shock the viewer and to postpone recognition. He wrote: “One has to take several different shots of a subject, from different points of view and in different situations, as if one examined it in the round rather than looked through the same key-hole again and again.”

Rodchenko was born in St. Petersburg to a working class family. His family moved to Kazan in 1909, after the death of his father, at which point he studied at the Kazan School of Art under Nikolai Feshin and Georgii Medvedev, and at the Stroganov Institute in Moscow. In 1921 he became a member of the Productivist group, which advocated the incorporation of art into everyday life. He gave up painting in order to concentrate on graphic design for posters, books, and films. He was deeply influenced by the ideas and practice of the filmmaker Dziga Vertov, with whom he worked intensively in 1922.

Impressed by the photomontage of the German Dadaists, Rodchenko began his own experiments in the medium, first employing found images in 1923, and from 1924 on shooting his own photographs as well. His first published photomontage illustrated Mayakovsky’s poem, “About This,” in 1923.

From 1923 to 1928 Rodchenko collaborated closely with Mayakovsky (of whom he took several striking portraits) on the design and layout of LEF and Novy LEF, the publications of Constructivist artists. Many of his photographs appeared in or were used as covers for these journals. His images eliminated unnecessary detail, emphasized dynamic diagonal composition, and were concerned with the placement and movement of objects in space.

Throughout the 1920s Rodchenko’s work was very abstract. In the 1930s, with the changing Party guidelines governing artistic practice, he concentrated on sports photography and images of parades and other choreographed movements. Rodchenko joined the October circle of artists in 1928 but was expelled three years later being charged with “formalism.” He returned to painting in the late 1930s, stopped photographing in 1942, and produced abstract expressionist works in the 1940s. He continued to organize photography exhibitions for the government during these years. He died in Moscow in 1956.
Posted by John A Benigno at Monday, January 24, 2011