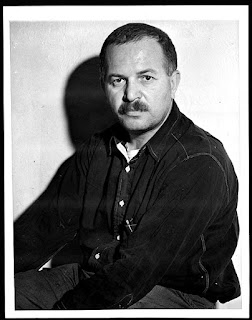 "I became interested in photography when I found my own sketching was inadequate."

"I was primarily interested in people, and people in action, so that I did nothing photographically in the sense of doing buildings for their own sake or a still life or anything like that."

"When you talk about war on poverty it doesn't mean very much; but if you can show to some degree this sort of thing then you can show a great deal more of how people are living and a very great percentage of our people today."

"Whatever I get involved in, I'm totally involved, you see."

Ben Shahn biography from American Studies at the University of Virginia:
Ben Shahn was born in Kaunus, Lithuania in 1898. He emigrated to New York with his family in 1906. He became a lithographer's apprentice after completing his schooling. He later attended both New York University and the National Academy of Design from 1917 to 1921.

In the 1920s Shahn became part of the social realism movement. Social Realism is a term used to describe the works of American artists during the Depression era who were devoted to depicting the social troubles of the suffering urban lower class: urban decay, labor strikes, and poverty. His early work was concerned with political issues of the time, while his later work portrayed the loneliness of the city dweller. Text and lettering formed an integral part of his designs and his work was often inspired by news reports.

After working in lithography until 1930, his style crystallized in a series of 23 paintings concerning the Sacco-Vanzetti trial. Shahn came to prominence in the 1930s as with "The Passion of Sacco and Vanzetti". Shahn dealt consistently with social and political themes. He developed a strong and brilliant sense of graphic design revealed in numerous posters. His painting Vacant Lot (Wadsworth Atheneum, Hartford, Conn.) exhibits a poetic realism, whereas his more abstract works are characterized by terse, incisive lines and a lyric ic intensity of color. The Blind Botanist (Wichita Art Mus.) is characteristic of his abstractions. Shahn's murals include series for the Bronx Central Annex Post Office, New York City.

From 1933 to 1938 he worked as a photographer for the Farm Security Administration, producing masterful images of impoverished rural areas and their inhabitants. Shahn used photographs throughout his career for both composition and content. The photographer position at the FSA was a dream job for Shahn because it provided him the opportunity to travel though Depression-era America taking pictures. He later used those photographs for his paintings years later. Critics in his time felt that using photographs for paintings diminished the value of a painting. However, Shahn's work became the most popular artist of his age. His work was on the cover of Time and well as the Museum of Modern Art.

Shahn has been described as a man of uncompromising beliefs and an artist who spoke to the world. Shahn continuously adopted new themes and mediums to define the human condition of his time. Active until the end of his career, Shahn was also a distinguished lecturer, teacher, and writer.
Posted by John A Benigno at Friday, September 02, 2011